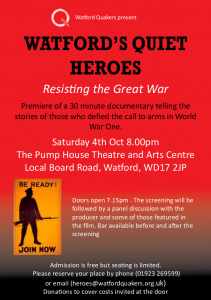 Watford’s Quiet Heroes is a 30 minute documentary telling the stories of some of those who defied the call to arms in World War One.

The bravery, hardship, sacrifice and sorrow of the combatants in WW1 are rightly remembered during the centenary.  The impact on families and communities at home is also coming alive in re-discovered personal stories and many centenary projects and events. There has been less attention to those who refused the call to arms and the consequences they had to face. The challenge presented by this very small minority is as relevant today as it was then.  Our film is about three of them.

The film has been shown at two public  screenings in Watford, first at the Pump House Theatre, and then at Watford Museum. Both were very well-attended and included lively post-screening discussions on the relevance of war resistance in the UK today. The production team are also offering workshops based on the film to local schools and other groups. Please get in touch if you are interested in hosting one.

The film is available as a DVD with over 2 hours of additional features.  It is suitable as a stimulating educational resource for an audience aged 11+. Copies of the film are available at £5 each (inc. UK postage) by phoning 01923 269599 or emailing heroes@watfordquakers.org.uk

On war and resistance…

“The least that men can do is that every man of fighting age… should redeem his word to women and make ready to do his best to save the wives and daughters of Great Britain from outrage too horrible to even think of.”
Emmeline Pankhust, Suffragette leader, November 1914

“The long-threatened European war is now upon us. You have never been consulted about this war. The workers of all countries must strain every nerve to prevent their Governments from committing them to war. Hold vast demonstrations against war, in London and in every industrial centre. There is no time to lose. Down with the rule of brute force! Down with war! Up with the peaceful rule of the people!”
Keir Hardie, Founder of British Labour Party, August 1914

“May God steady me, and keep me faithful to a call I have heard above the roar of the guns. By the feverish activity of my hands, I might help to save a fraction of the present human wreckage. That would be for me no sacrifice. It costs far more to spend mind and spirit, if need be, in the silence of a prison cell, in passionate witness for the great truths of Peace. That is the call I hear.”
T Corder Catchpool, Quaker Conscientious Objector at Court Martial, 28th March 1918

“I shall only consider the best means of making the path of that class [conscientious objectors] a very hard one”
David Lloyd George, Secretary of State for War, 26th July 1916.

“Mankind must put an end to war before war puts an end to man-kind. War will exist until that distant day when the conscientious objector enjoys the same reputation and prestige that the warrior does today.”
President John F. Kennedy